The Problem With The Word “Trauma” Today

How did the word trauma go from practically nonexistent to the most used word of the last decade?

Before the two world wars, trauma was rarely spoken about, nor acknowledged. However, during these wars, many soldiers suffered from what was called “shell-shock,” which was basically a different term for trauma. Originally, these soldiers were given treatment as well as disability pensions, but later, it was seen as a character defect, a sign of an unwilling, cowardly soldier.

In January 2022, College Board announced that the SAT would be administered digitally beginning in 2024. The new format, designed to increase accessibility to the exam, has been brought about in an era where students and educators are questioning the validity of standardized tests.

The home depot on Blossom hill caught on fire, it quickly changed from a one-alarm fire to a five-alarm fire. The fire started at 6:00 pm and was deemed under control at 11:45 pm. The cause of the fire is still unknown and is under investigation.

Imagine a child standing right in front of you. What are they like to you? Are they a social, ongoing child? Or are they a shy, anxious child who keeps to themself? Parenting style is a concept that explains parents’ attitudes and behaviors toward their children. Different parenting styles result in various types of children. As kids develop, they heavily depend on their parents’ opinions/responses. Psychologists use four types of parenting styles – authoritarian, authoritative, permissive, and neglectful – to describe the relationship between children and parents.

The AP Exams are rapidly approaching- Here’s what you can do to help you succeed!

Leigh High School’s Wellness Center aims to support students through their times of emotional distress and uncertainty. The concept was first proposed in principal Kara Butlers’ wish list for the Home and School Club. According to the center’s website, she believes prioritizing “student mental health projects” would be an invaluable contribution to the school community.

I’ve talked a lot about student inclusivity, but why does it only have to stop at how student’s act? Who’s to say that teachers aren’t a huge part of making the environment of a school?

Leigh teachers and staff are not exempt from this call out either.  Many teachers don’t seem to understand the weight of our grades and the importance we place on them, and we simply can’t ignore our grades because of seemingly unfair policies and practices. 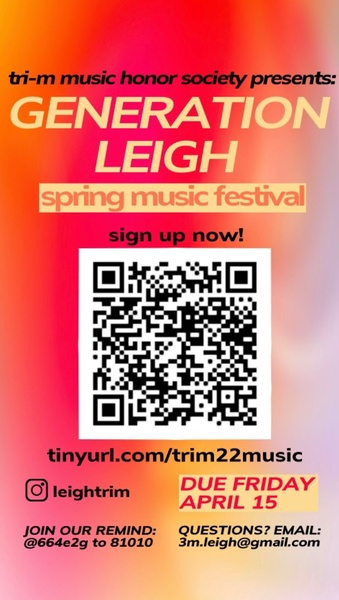 Check out the link below to learn more about the festival and read some interviews with the performers!

Sholeh zard is a traditional Iranian recipe that consists of rice pudding that has been colored and flavored with saffron. This dish is a very popular and ancient persian dessert that has been passed down throughout many generations. It was even enjoyed during the Persian Empire! People traditionally eat Sholeh Zard on Persian New Year or on other special occasions, whether it is something small like a nice dinner out or at a party. On very special occasions, Sholeh Zard is decorated with ground cinnamon and other edible pieces. It is definitely one of my family’s favorite Persian dishes and I hope that you can try it out someday!

Bittersweet: How Longing And Sorrow Make Us Whole

Described as “the perfect cure for toxic positivity and a sparkling ode to the beauty of the human condition” this book explores the beauty of the “bittersweet” side of life. Throughout Bittersweet, Cain explores the importance of sadness, how to transform pain into creativity, how to live authentically in a world only focused on the positive, and how to live knowing that we will die.

In simple words, Relay For Life is an overnight event funding for the American Cancer Society. Like a relay, at least one person from each “team” must be on the track during the event (join Team Famleigh here!). With food, fun activities, themes for laps, survivor speeches, luminaria, and more, Relay For Life is a fun way to fundraise for an important cause. Bring your friends and family, and let’s all celebrate love and support for our community!

In the United States, a limited liability corporation, LLC, is a corporate structure that shields its owners from individual responsibility for the firm’s debts or liabilities. Limited liability is a significant benefit for any company since it balances out the drawbacks of having more internal conflicts, double taxation, and losing personal assets.

On March 21st, flight MU5735’s crash prompted President Xi Jinping to start a full scale investigation. “It’s very unconventional for a plane to be cruising and then suddenly dive like this,” (Dr Brown, BBC). This Chinese aircraft was flying towards Guangzhou from Kunming when it nose-dived and crashed into a forest in Guangxi just an hour after takeoff.

The morning of March 13 was different from other mornings.

For one thing, I lost an hour of sleep. Thank Daylight Saving Time, or DST for short. Since then, my sleep cycle has shifted unhealthily late at night. I wake up feeling more tired than before. Getting through English and Biology in the morning has suddenly become more difficult. In short, my internal system has been messed up, and I won’t be getting back that precious extra hour until November 6, 2022. Is Daylight Saving worth all the hassle?

The Eleight is the independent, student-run publication of Leigh High School. Content does not reflect the opinions of the entire student body or editorial team. Rather, it reflects the outlook of individual students and authors. We strive to provide an inclusive platform for all members of the school community regardless of race, religion, cultural identity, ethnicity, sexual orientation, gender identity, socioeconomic status, political affiliation, etc. We operate under California Education Code 48907 and are subject to its limitations. Any questions, comments, or concerns can be sent to the editorial team at editorial.eleight@gmail.com.